So I waited for one…

In August 2014, a bunch of guys calling themselves the Five Ninjas, among them folk from the Raspberry Pi Foundation and Pi-friendly accessory seller Pimoroni, announced Slice, a compact media player based on the Compute Module. Their inspiration was the original Apple TV – the x86-based silver one, not the iOS-running black box that Apple just made £20 cheaper. The first Apple TV was eminently hackable: rip out the custom Mac OS X install and make yourself a low-power Linux desktop or a more open, less tightly bound media centre. That’s what I did with mine, to run XBMC – now called Kodi – on it.

Slice appeared on Kickstarter, and it immediately caught my eye as a more powerful version of the box I’d adapted my Apple TV to be. And it was based on the Compute Module, so two birds, one stone. I put down £109 for a disk-less preview unit and put a note in my diary in anticipation of Slice’s November release.

And I waited. Again.

And waited some more as November came and went. Would Slice make it out in time for Christmas?

Nope. It’s now March 2015, and the first Slices have only just left Pimoroni’s Sheffield assembly plant, each one with a custom motherboard containing a single, DIMM-slotted Compute Module. I have one here and so the question that must be asked is, does Slice, ahem, cut it?

I’m very pleased to say it does though, as you’ll see, with it certain qualifications.

First, the Slice’s looks. Slice is a small metal box with a translucent plastic spacer running round the middle. The metal is anodised aluminium in one of choice of three colours (black, gunmetal and red) and very stylish it looks – and feels – too. The spacer provides not a view into the box but a way for the Slice’s 25 NeoPixels – individually addressable RGB LEDs, each with their own in-package controller – to shine forth. These LEDs generate a rainbow of different colour sequences that are triggered as you interact with the Slice using its remote control, which is small, black and not at all bad, but comes over as a fattened up plastic clone of Apple’s slimline aluminium remote from China – which indeed it is. To be fair, compared to most of the cheap Chinese remotes I’ve seen bundled with media players over the years, this one is good and has at least been customised for the Slice. 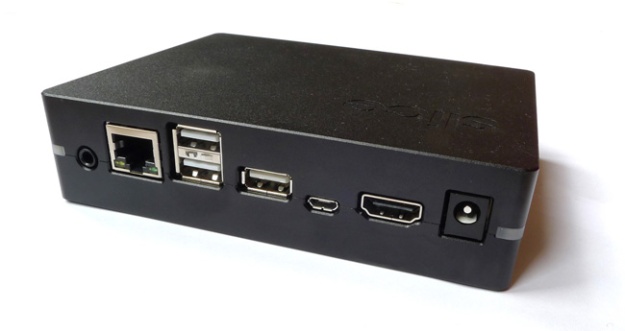 HDMI for output; four USBs for input; Ethernet for both

Slice runs OpenElec, the pared back Linux distro designed to boot straight into Kodi. They’re all open source. OpenElec boots out of the Compute Module’s 4GB of Flash so you can run it entirely without a disk, which the preview unit lacks to expedite shipment. Just grab and play video and music files on your NAS or shared from your computer.

I had a spare 500GB 2.5in drive pulled from an old laptop, so I put that in. Opening the Slice is just a matter of removing four bolts with a supplied Allen key. This separates the Slice’s two halves and the band of translucent plastic from each other. None of them are machined to fit together so reassembling the case requires careful alignment, but once you have a couple of the bolts in firmly, the rest follow easily. Slice’s internal Sata connector is mounted on the underside of the motherboard, so that has to be detached too; out come five screws. The preview kit came with four further screws to fix the drive in place, plus a suitably sized sheet of thin cardboard to place twixt disk and PCB. Put the card down on the board, slot in the HDD or SDD, flip them round, fit a couple of screws, reassemble the case and you’re done. 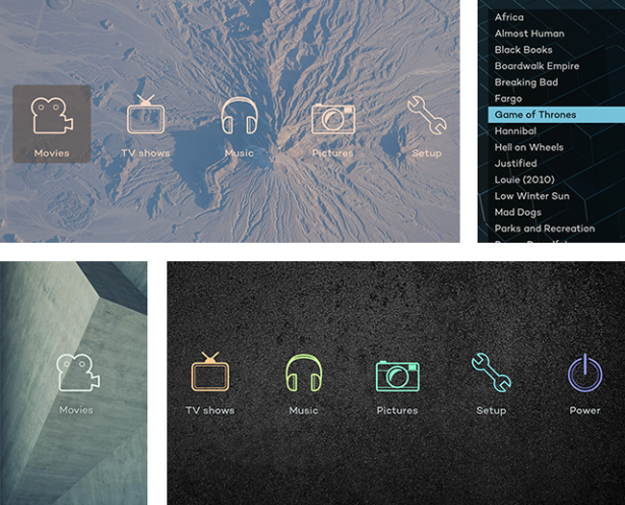 One of the Slice’s four USB ports is a micro connector dedicated to computer connections. Hook the Slice up to your machine this way and it automatically mounts as an external drive for formatting (Five Ninjas recommends ExFAT, for cross-platform support) and provisioning. Kodi has a built-in SMB server, of course, but copying files directly is quicker and the Slice gets extra points for making this very easy to do. A micro USB cable comes bundled; it has an extra full-size USB port if you’re choice of HDD requires two ports worth of power. You get an HDMI cable too.

The preview unit was intended as a way to get hardware into backers’ hands as quickly as possible. As such it’s still notionally a beta; it’s marked as a development release when you start it up. Kodi itself is reasonably mature, as you’d expect a popular and long-running open source project to be. But the Slice side needs a little work: some of the lighting effects, for example, seem mismatched – flashing green when you hit pause, red when you hit play again, for example – and as yet there’s no way to configure them yourself, not the colour patterns displayed, the events they’re triggered by, or the brightness. An app that will let you do this is in development as a result of Five Ninjas exceeding its Kickstarter target, but it’s not available yet.

The hardware is in very good shape. The Compute Module’s 900MHz Broadcom SoC has a good graphics core, here put to use animating the GUI and handling video decoding. It handled all the 1080p content I threw at it with aplomb, though it baulked at a 2160p (4K) MP4 file. To be fair, my MacBook Air could barely cope and it’s not a common frame size, but it may become one in the years ahead. Slice wasn’t happy playing DVDs in a USB-connected drive, either, but you’ll have ripped all your discs by now surely? 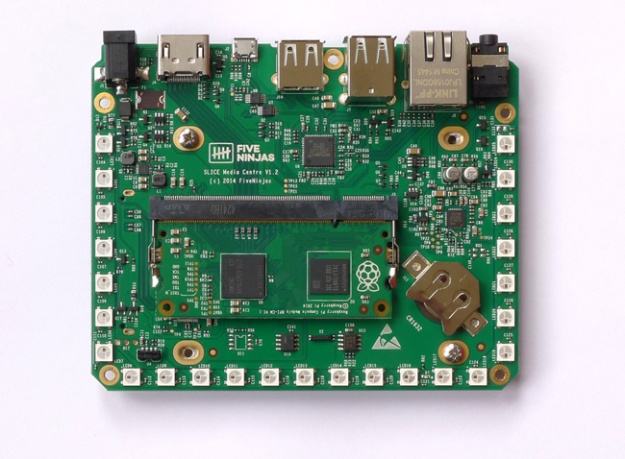 There are issues with audio output through the Slice’s combo 3.5mm analog and digital optical port, but the development team is aware of this and says it’s working on a fix. Audio through HDMI – Slice’s only video output – is fine, though. VC-1 encoded video doesn’t always trigger the hardware acceleration, I’m told.

I’ve mentioned the HDMI, audio and USB ports, but Slice also has an RJ45 for Ethernet, though only up to 100Mb/s. That’s the Pi origins showing through. There’s no WiFi in the unit itself, but Five Ninjas is bundling a 2.4GHz 802.11n dongle. Power is provided by a 5V, 3A wall wart.

Slice’s aforementioned remote is good. It uses Bluetooth (or something akin to it) which is easily paired to the base unit. The only disappointment is that the receiver – another dongle – isn’t built in, so that’s another USB port gone. Still, it’s very responsive and allows you to control the Slice without pointing at it. I could quite easily wander into the kitchen and, out of line of sight, start music playing.

However, the remote exposes the Slice’s key ‘flaw’, already hinted at by the software. This media centre is built almost entirely from off-the-shelf parts. The motherboard is custom, sure, but it’s essentially a glorified Raspberry Pi. Buy yourself a Raspberry Pi 2; install OpenElec; hook up an external HDD; buy the remote from Alibaba; and you have your own DIY Slice. You won’t get the very nice metal casing or the fun lighting effects, of course, but the latter are more gimmick than anything: cute but by no means essential to the device’s operation. If you stream all your media, you don’t even need the internal storage. 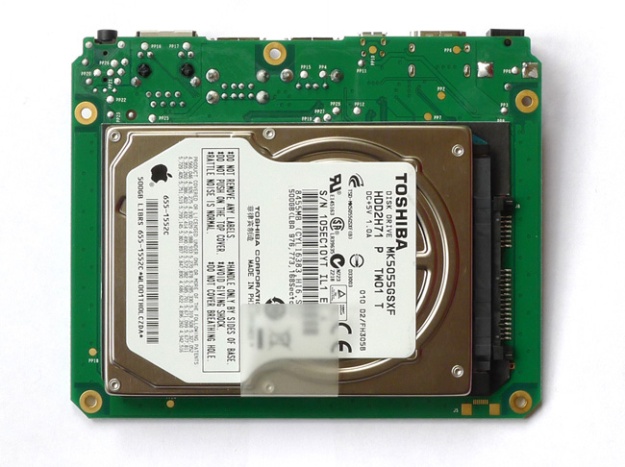 Five Ninjas is aware of this and, unlike so many other manufacturers, doesn’t pretend that there’s literally nothing like Slice on the market. There’s nothing here that, say, set-top boxes from Roku, Apple, Google or WD don’t do – other than the lighting effects and the support for a built-in HDD, of course. They do it more cheaply too, and provide access to online services like Netflix and BBC iPlayer, but offer far, far less scope for messing about with the hardware as you see fit. Indeed, Five Ninjas is quite happy if you re-flash the 4GB storage with another OS and turn it back into a Raspberry Pi. It wants Slice to be considered to be as hackable as the first Apple TV was.

And I think that‘s why I like the Slice – and why I put ‘flaw’ in quote marks. You sense this is a media player built by unrepentant hardware and software tinkerers to put in their own living rooms and which they’ve decided to give everyone else a chance to own too.

Update There’s a UK-only Kodi plug-in for BBC iPlayer here. I’ll be trying this out shortly; I’ll tell you how I go on here. It works. Download the .zip file from the link above to a USB stick; plug it into the Slice; Go to Setup -> Add-ons -> Add-ons Manager -> Install from Zip; and load the zip file. When installed, the iPlayer plug-in lives in Setup -> Add-ons, but if you make it a favourite (highlight the iPlayer add-on and press the menu button on the remote) you can access it elsewhere with a tap of the left arrow on the remote. The plug-in lists iPlayer’s current offerings in the Kodi UI rather than iPlayer’s own, but it’s no less usable for that. Select a programme and it’s just like viewing local or networked content.

Five Ninjas have come up with a very tasty Pi-powered media playback machine. The hardware’s done, but the software needs a little further work and lacks access to many of the streaming services a lot of potential users have grown accustomed to. This is never going to be a mass-market proposition, then, but if its open source credentials and scope for on-board storage appeals to you – let alone the lighting effects – it’s worth a look.

An edited version of this review first appeared on The Register